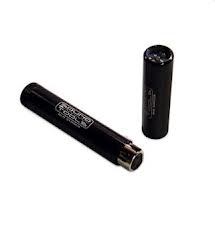 The SoundTool™ Sniffer and Senders are ‘On the fly’, highly reliable, testers with remote ends used in the field to quickly determine faulty XLR cables and for testing phantom power at various stages and locations. They can also be used to quickly test phantom power on snakes. Designed by Rat Sound to deal with the “real world” of pro audio, the SoundTools™ Sniffer cable tester is a amazingly simple and reliable tester with many unique features. Testing snake lines and cables with the ends located at a distance from each other is now simple and easy and you can do it without running extra cables just to test. The ability to test snake lines using phantom power as a test source allows you to troubleshoot an entire snake system in minutes. The barrel design is extremely reliable and eliminates the problem many testers have of internal solder joints failing. The simple 3 LED readout indicates every possible short, open or cross wire in XLR cables. If the tester reads “green” the cable will work!

A key feature of the “patent pending” design is its ability to detect a short between pin 2 and 3 while utilizing phantom power as the test source along with the ability to test for every other possible fault that would cause the mic to lose signal. This means that when experiencing a “bad line”, troubleshooting complexity and time can be greatly reduced by using phantom power and the sniffer. Many people are familiar with dealing with a bad line during line check or set change “hey the house engineer says line 7 is down, try another mic, check one two, radio the engineer and ask if it works, nope still bad, try swapping the mic cable, radio the engineer and see if it works and so on and so on. The SoundTools™ Sniffer gives the stage tech the ability to trouble shoot without feedback from the console operator. Instantly know whether it is the mic or the line. Have the engineer supply console phantom power to the bad line. Plug in the sniffer where the mic was, “green lights” means the mic is bad, any other combination means it is the cabling. Plug the SoundTools™ Sniffer into the stage box, “green lights” means the snake line is good, mic cable is bad. What normally would take 10, 15 precious minutes or more can be accomplished in a minute or so. The SoundTools™ Sniffer is a simple, inexpensive, reliable, compact tool that can save valuable time with accurate results.

Checks all potential faults and wiring problems in XLR lines

Can be used with or without the Send Unit

When used with any standard Phantom Power source, the SoundTools™ Sniffer indicates faults with the following indications:

On/Off switch allows storing the Send and Receive units plugged into each other.

No battery drain if unit is left on while not plugged in.

Will not harm microphones or electronics if in inadvertently plugged into a cable with a Mic or console attached to the other end.

There are two basic ways to use the Rat Sniffer.

1) Using the Sniffer and Sender together you would attach them to a mic cable, the sniffer on one end and sender on the other. Turn on the sender and if the three LED’s on the Sniffer illuminate green, the mic cable is good. Any other combo is a fault condition that can be decoded with the included card.

Note: you can attach the sniffer directly to the sender to test them. Also, if the Sender is not attached to anything, the battery will not drain so you can leave it on.

2) You can use the Sniffer without the Sender if you have a console that supplies phantom power. In which case you would use the console as the “Sender” and turn on phantom power, plug a mic cable in to that channel and plug the Sniffer onto the other end of the mic cable.